Basically I am reading a transistor switch example from Horowitz Hill book - The art of electronics.

He starts by explaining that there are 4 golden rules for transistors:

1) Collector must be more positive than the emitter
2)base-emitter and base-collector act like diodes
3)transistors have max values for Ic, IB and VCE that cannot be exceeded
4) when rules 1-3 are applied Ic is approximately IB that is (Ic=βIb)

Going deeper into the example he explains when the switch is closed that.

So here is where things get confusing for me.

If Ic is 940mA how are you breaking the rule that collector voltage is not greater than emitter voltage?

He says to have a current of 940mA can only occur if you would pull the collector below ground. I totally dont understand this statement!

What exactly does this mean?

How would you pull a collector below ground?

Please help!  Here is the circuit. 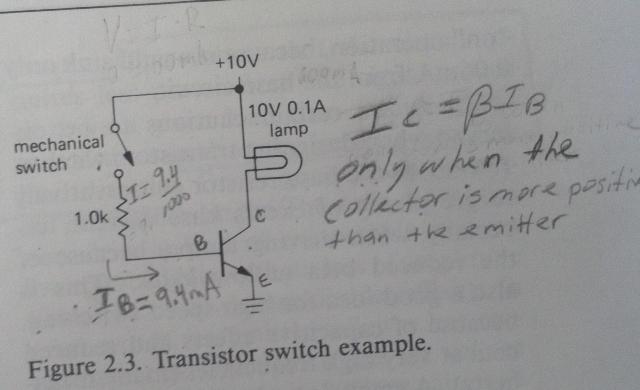 I have to take issue with golden rule #1

1) Collector must be more positive than the emitter

This applies for an npn transistor but for a pnp transistor the collector would have to be more negative than the emitter.  So for now let’s just apply these rules for the npn transistor.

If Ic is 940mA how are you breaking the rule that collector voltage is not greater than emitter voltage?

Now your other question:

He says to have a current of 940mA can only occur if you would pull the collector below ground. I totally dont understand this statement!

What exactly does this mean?

How would you pull a collector below ground?

We have already said that the collector current cannot be 940mA.  This applies to your given circuit.  And with the transistor in saturation, it basically acts like a piece of wire connecting the collector to ground.  So let’s replace the transistor with a piece of wire as shown in the "saturated" drawing below.  But in order to get 940mA to flow through the lamp we would need more voltage across the lamp.  So instead of connecting our wire to ground, which replaces the transistor, let’s connect it to a negative supply voltage.  If 10 volts across the lamp gives us 100mA then 94 volts across the lamp would give us 940mA, so we need another 84 volts.  So we will set our negative voltage supply to 84 volts as shown in the "940mA" drawing below.  Now the collector (where it would have been) is below ground.  But wth your original circuit, that’s not possible so the collector current of 940mA is not possible.  In fact with 940mA and 94V across your lamp, the lamp would burn up instantly.  You have to understand the concept of saturation.  I hope this helps.